Graphic adventure for adults set in a dystopian future 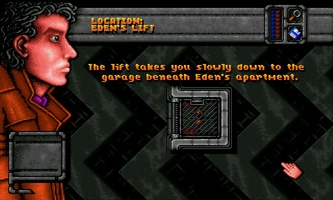 Advertisement
Published in 1994, Dreamweb is a graphic adventure where you play as Ryan, an average worker living in a large futuristic city who begins to be troubled by strange dreams.

In these dreams, a strange person asks Ryan to destroy the seven evils, which are incarnated in seven people. And that's where your anti-hero's violent adventure begins - a graphic adventure for adults where dying is not only possible, but actually very common.

Gameplay allows you to perform the same sorts of actions you would in a similar game: you can pick up objects, use them, talk to other characters, etc. The main change is that the game is played from an overhead perspective as opposed to the classic third-person view.

Dreamweb is an interesting graphic adventure that still plays well despite its age. It's true that it can get a little difficult, but overall it's worth the effort.
Translated by Molly Lincoln
Advertisement

There are opinions about Dreamweb yet. Be the first! Comment

Summertime Saga
A fun and spicy adventure
Minecraft
Build, craft, and give free rein to your imagination
Yandere Simulator
Stealth and murder in a Japanese school
Five Nights at Freddy's 4
The last chapter on this horror saga
AM2R (Another Metroid 2 Remake)
Remake of Metroid II Game Boy original
Eyes: The Horror Game
The terror is watching... and it's out to get you
Who's Your Daddy
Save your son from all the dangers
P.T. for PC
The terrifying P.T. for PS4, now on PC
Advertisement